This is a phrase Daniel and I repeat anywhere between 5-20 times a day.

Out of our three boys, Noah tends to display the most “outward” signs of Autism.

When he was two years old, he found a short, plastic hose – part of a mattress air pump – maybe about three feet long – and he started carrying it around with him and shaking it. He would shake while walking, and also while sitting, and all the while staring at the end of the hose. This was something new for us, because Gabriel never did this.

In Special Education speak, this is called “stimming” or “perseverating.” Its purpose is to meet some sort of sensory need, and has been compared to tapping your fingers or bouncing your leg up & down when your legs are crossed; it’s akin to any kind of “normal” looking body twitching that people do to expend extra energy.

So we naturally started calling it “shaking” because that’s what it is, and it would sound ridiculous to say, “Noah, please perseverate quietly” all the time.

Over time, the shaking became more frequent and more intense. He started standing up and literally dancing around as he shook, while making high-pitched “jibberish” noises (noises that we’ve named “chirping”).

He also evolved from his beloved hose to hair ribbons, strings, and even long-stringy leaves off of trees. In fact, I can always tell when Noah has arrived at my office even before I enter, because he has left evidence all over the ground in front of my door. There are long, thin leaves everywhere – the rejects from the many leaves he has pulled off of nearby trees. (And I feel sorry for the nearby trees; they have all been stripped bare up until the height of Noah’s outstretched arm). 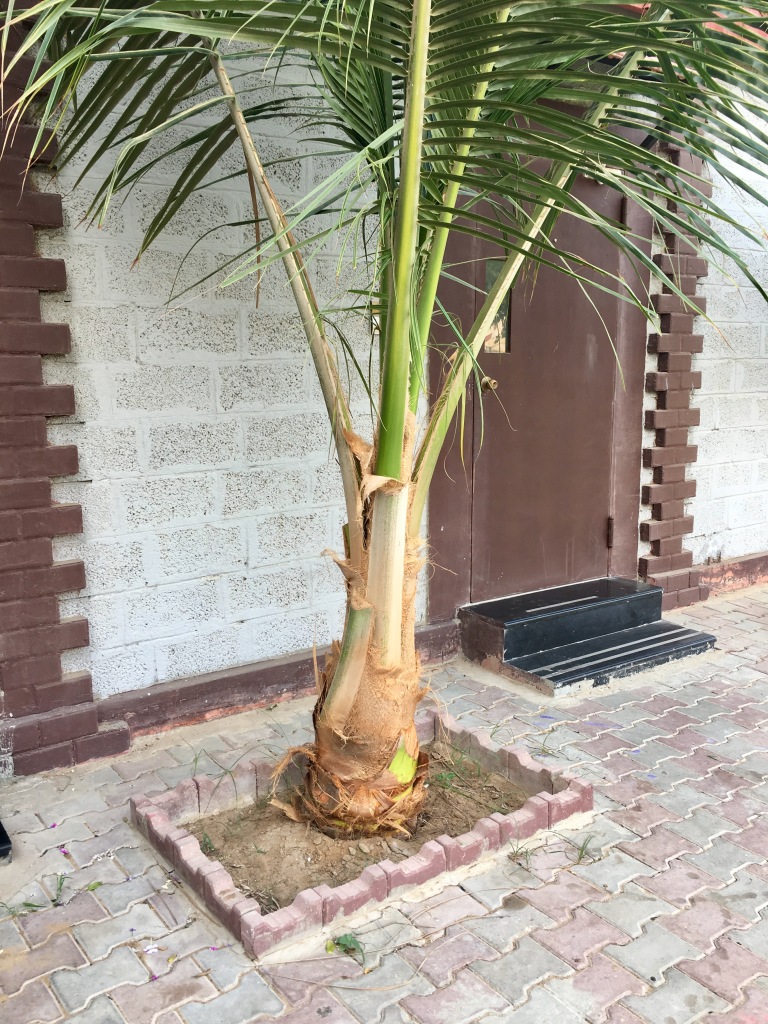 He is always looking for something special in the leaves, and he’ll keep pulling them off trees and trying them out until he finds the “perfect” leaf that gives him the ultimate sensory satisfaction. What specific characteristics are necessary for the perfect leaf?  No clue. But I can’t wait for the day that he is able to verbally express himself well enough to explain it to me, because I am insanely curious.

And he does it when he’s bored, or when there’s nothing structured happening, or if there’s no iPad around. So if we allowed him to do so, I believe he would shake every waking minute. Whatever sensory need he is meeting, that need is profound.

What’s great is, it’s not like he can’t control it. He can. When we tell him to stop, he stops. Just not for long.

When Samuel was diagnosed with Autism, the PhD who worked with him asked us about Noah’s shaking, since Noah was there with us at the hospital. She seemed shocked that we allowed him to shake. She told us that we needed to immediately stop him whenever he started it, because it would open him up to bullying. This I completely agreed with, but what she meant was that he shouldn’t be allowed to do it at home – or at all, anywhere, anytime.

Now, I have an MSEd, not a PhD, so I didn’t argue with her, but as a Mom, this didn’t seem right. He is doing this for a reason, isn’t he?  What would it do to him if we forbid him to shake? (In retrospect, I wish I’d asked her that question – PhD or not.)

So we started to limit the shaking, in that we told him he wasn’t allowed to shake at school. But to compensate, he started pulling small strings from his socks and rolling them around in his fingers – which I have to say I do prefer more to the out & out shaking / chirping show, but over time, all of his school socks started falling apart. Then he went for strings from his shorts. Then his shirts. Then our curtains at home. Any string. A little annoying, but no big deal, but what was a big deal was the fact that this type of “shaking” was so discreet that he could (would) do it during class, and if he’s staring at and concentrating on a ball of string, chances are he’s not paying attention to the lesson – and yes, that’s a problem. So we asked his teachers to be on the lookout for this and not allow it during class time.

And we didn’t worry because he was still getting his fill of the full-on shaking at home.

But one weekend, about a year ago, I’d absolutely had it. As much as I love our little Noer (my nickname for him), the chirping was out of control. I’d listened to it for as long as I possibly could. One way I’d learned to adapt was to block it out mentally, but on this day, this coping mechanism was no longer working.  He was so loud and so annoying I could n-o-t take it anymore. (Not one of my finest moments coming up here.)

I absolutely blew up.  Before I knew what I was saying, the words were out of my mouth. I shouted, “Noah, STOP! STOP! STOP SHAKING!”

Anyone who knows Noah knows that he is very, very (I mean v-e-r-y) sensitive, and so of course he stopped in his tracks – stunned – and the saddest, most heart wrenching sobs followed. And he ran to me and nuzzled up to me and between the sniffs and gasps, he repeated, “Mommy, I’m sorry. I’m sorry, Mommy.” Etc.

And I immediately realized what I had done, and I was so sad, and so ashamed, and I started crying too – holding him and petting him and telling him, “I’m sorry too, Noah, I’m sorry, it’s OK, it’s OK.” I reminded myself that he’s not doing this on purpose. He can’t help it. He needs it. But I felt at that moment (OH so selfish moment) that I just couldn’t handle it anymore – and so I remembered the PhD’s words, and I thought I’d give her advice a go.  Maybe she was right; maybe I’ve been overestimating his need to shake.

So I quietly said, “Noah, you need to stop shaking. OK? NO more shaking from now on. Do you understand?”

And at that moment, he was so ready to please me and make me happy again that he immediately agreed and (still sobbing) uttered, “Ok, Mommy, no shaking, Ok Mommy, make Mommy happy, Ok?” I said, “Ok, thank you Noah.” And that was that.

For the next few days, he stuck to his word. He sat on the couch while we watched movies, played games on his iPad, and played with some toys. He seemed “normal!” But he didn’t seem himself, and each day after he seemed a little bit worse – a little more depressed. Daniel and I both noticed this, but I was so proud of him for being so strong (and I was so enjoying our newfound silence) that I played it off as probably something else – maybe something at school wasn’t going well, and he was sure to bounce back soon. Daniel wasn’t so sure.

Then a couple of nights later, while asleep, Noah wet his bed. Which never happens.

Daniel is often more insightful than I am, and he called it. He put two and two together and helped me realize that this was getting bad.

It’s like his brain and body were starving. He was fighting a primal urge and going through stress (possibly even pain) that we probably can’t imagine – bravely resisting what his body/mind desperately needed – in order to make Mommy happy.

He is so brave, and I am such a bitch.

I went and found his favorite “string” – part of an old Halloween costume that I had hidden away in a drawer – and went to him and handed it to him. I gently told him, “Noah, I want you to shake.”

The look he gave me was a mix of disbelief, happiness, and relief. But he was cautious, like he didn’t believe me. He confirmed, “Shake?!” So I reassured him, “Yes, Noah, shake! It’s OK. Please shake! Make mommy happy! But Noah, do you think you could shake quietly?”

Noah very happily replied, “Yes Mommy! I’ll shake quietly!” And he started to do his dance, holding his ear with one hand, leaning slightly over at the waist, feet running in place, and shaking the fire out of that string.   And he was back. My happy Noer was back. He still chirped a little, but it was so quiet it sounded like a mouse squeaking, and I can certainly live with the mouse.

At that moment I was eternally grateful for that string.   That string was nourishing my baby’s body and mind, and bringing him back to life.

So now, Noah is allowed to shake in my office, his Daddy’s classroom, and at home, but not out in public. The world isn’t ready for that yet.  And he still needs constant reminders to “shake quietly” at home, but that’s OK.  We’ve adapted.  If he needs to chirp, he is able to go shake in another room – and we’ve got a surplus of earphones. 🙂  The point is, he’s getting what his mind and body need, and that’s all that matters. 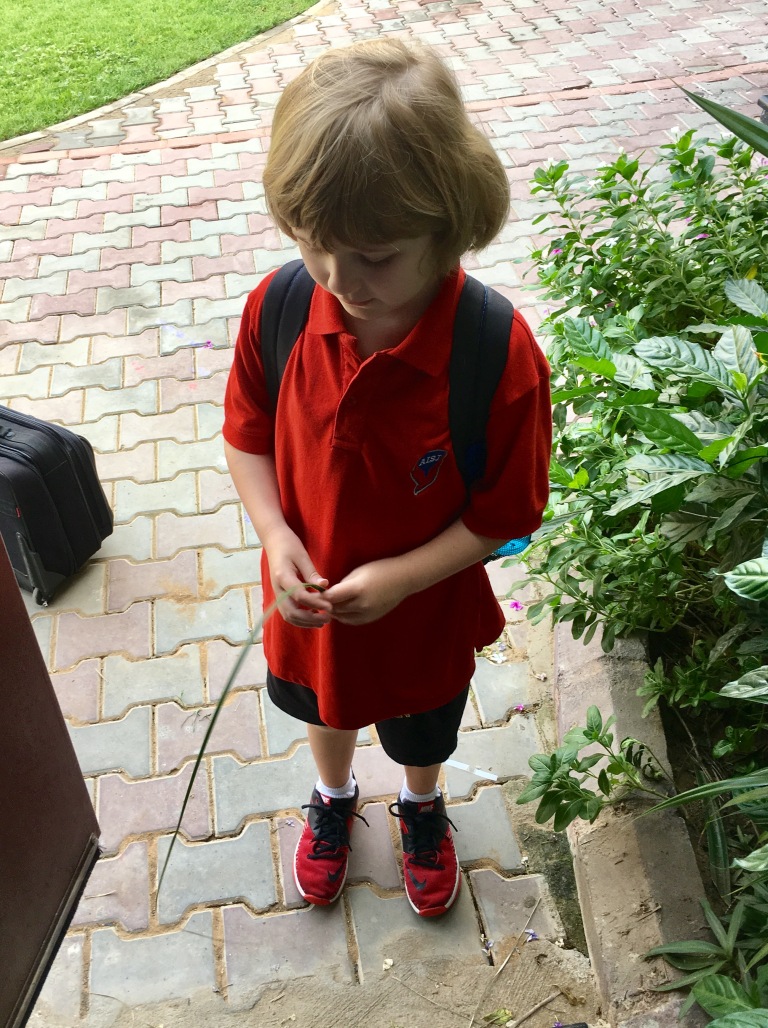