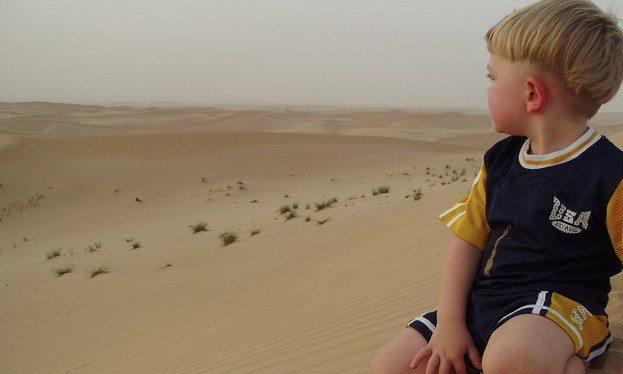 Allow me to explain.

This year marks the beginning of our family’s seventh year in Jeddah; by far, the longest Daniel & I have ever lived in one place (as a married couple, that is).

In our 18-year relationship, we’ve lived in six countries and moved homes 10 (soon to be 11) times.

But I’ve been perfectly happy with it, as I had my fair share of stability growing up. I lived in Oklahoma until I was 23: same house, same school district K-12, university was only 1 hour away from home, etc.

I think this is why moving around so much (meaning moving countries) hasn’t bothered me, and Daniel’s situation was the very same, but in Wisconsin, and he is so easy-going and eager to see the world, home is wherever his family is.

But if you look at research, people with Autism (especially children with Autism) crave stability and structure.  Yep, two things Daniel & I dearly lacked early on in our marriage (geographically-speaking, that is…) as we happily hopped the globe, on a mission to see the world.

Our sweet Gabriel was the first to hop around with us, and honestly, I think we produced some good stability for him in Abu Dhabi (he lived there ages 1-5) but then we went a little crazy – trying to figure out life – and moved four times in two years, spanning three continents, between his ages of 5-7:

Of course, we had Noah with us as well during this uber-nomadic period, but he was a baby, and he was only three when we arrived here in Jeddah, so Saudi is really the only home he’s ever known.

And same with Samuel, for obvious reasons. He was born here in Jeddah, & truly has AISJ Falcon blood flowing through his veins.

We will never know what those two years of our moving around did to him.

Although I believe we had him enrolled at good (or at least decent) schools, he had some rough experiences (and these are only the ones that we know of).

We know he was bullied in Peru; at one point, his face was shoved in the sand by another child – and to this day he still remembers the feeling of sand going up his nose.

He wasn’t able to talk very well back then, but in his broken up speech, he knew enough to tell us these words in this order: “Boy, Push, Face, Sand, Nose, Hurt.”

In Oklahoma, he was subjected to a very NON-inclusive, self-contained program in school.

***Disclaimer: In my defense, I hadn’t started my Special Education courses yet, so I didn’t yet understand the importance of inclusion; knowing what I know now, we would never have enrolled him at that school

And although he had a wonderful Special Education teacher, we knew something was off with both him and the school.

One day, a couple of weeks or so into school, I went in to see him and he was going to visit the “neurotypical” classroom to which he was assigned.

When we got to the doorway, he didn’t want to go in.

That right there told me that he was uncomfortable, and that he didn’t feel like it was “his” classroom.

He also refused to allow us to put his class picture up on our refrigerator, because all of his classmates had either Autism or Down Syndrome, and we’re guessing (because he couldn’t tell us) that he didn’t like being in a picture that exclusively featured kids with disabilities.

We tried multiple times to put the picture up so he could see it, and every time, he would pull it off the refrigerator and it would end up on the ground.

His school in Colorado Springs seemed to be a little more inclusive, but then by chance, Daniel discovered he was being bullied again.

Daniel was dropping him off mid-day during lunch following a doctor’s appointment: Gabriel sat down at a lunch table, and as soon as Daniel walked away, another boy stood up, raised his hand up, and acted like he was going to hit Gabriel (with the Vice Principal standing about five feet away but he was too busy talking to another teacher to notice what was happening). Gabriel, upon seeing this, just laid his head down on the table.

Daniel just happened to turn around right at that moment and saw what was happening (and if you ever want to see Daniel get furious, just ask him about this incident). Daniel walked back over to the boy and quietly stared him down (and I wasn’t there to see it but it sounds like the boy promptly backed off and grew eyes the size of quarters).

Daniel took Gabriel’s hand, and led him out of the cafeteria, and Gabriel never went back to that school.

Now, that sounds a little dramatic, I realize, but by this time, we already had our jobs at AISJ and we were only two weeks away from leaving Colorado for Saudi – so Gabriel missed a couple of weeks but we didn’t care – better to homeschool him for a couple of weeks and keep him safe and happy.

In February 2011, I wrote a Facebook post saying that Daniel & I were off to a Search Associates job fair in Boston, and if/when we secured jobs, we were going to move there and stay there F-O-R-E-V-E-R.

Two days later, we were hired at AISJ, and we were ready for the long haul.

So here we are, nearly seven years later, still at AISJ, most certainly in the thick of the long haul.

But Gabriel, in spite of the Autism and usual longing for structure and stability…  It’s not the same for him.

He is used to moving around the globe, and now, even after all this time, still hasn’t adjusted to staying in one place.

He is by FAR the most vocal in our family about wanting to leave. He’s effectively spent 10 years of his life in the Middle East (four in Abu Dhabi, and almost seven here in Jeddah) so he is ALWAYS craving cold weather, rain, snow, doesn’t like palm trees, etc…

Everything that is the polar opposite of here.

He also remarked that every single classroom teacher he had in Elementary (Grades 1-5) has left Jeddah since he’s been here, and he’s right. He’s also lost friends he grew up with to Lebanon, South Africa, Switzerland, the UK, and the US – so while there is indeed longevity and stability, there’s also the transient nature of the international school community around him that has been hard on him.

And so, hence, his favorite question is…..

Gabriel, we are still here because you have exactly what you need at this point in your life, even though you cannot see it: you have stability and structure.

You are not EXcluded here.

You are not bullied here.

You have known many of these kids since 1st grade, and the kids here respect you for who you are.

**And……  It doesn’t hurt that all the kids know that Mommy, Daddy, and all our wonderfully supportive teaching colleagues are always watching you to make sure you’re OK… 😉

You also have opportunities you might not have had if we lived anywhere else: you learn Arabic, you’ve walked inside the Pyramids, you’ve eaten Nasi Goreng on a beach in Bali.

And, you are safe.  Quite honestly, you are safer living here, going to this school, than you would be in the United States (and don’t get me going on that issue…  I’d never shut up).

AISJ is a family.  We have a wonderful community and you are loved and supported in ways you will never know.

We want you and your brothers to focus on growing, learning, playing, and experiencing the world.  There is no need to worry about adjusting to new places and new people, even though we know you are strong and are able to do it, because you’ve proved you can do it, on multiple occasions in your life.

You do not comprehend this now, and that’s OK.  But I pray that one day you will understand why we have chosen this path for you and your brothers.