In my “Travel and Autism” post from March 3rd, I wrote about how nervous and basically traumatized Noah was during our recent, three-day hiatus to Egypt, which included his…

I also wrote about how we (Daniel and I, and his Learning Support team) were all going to work together to try to mentally prepare Noah for our upcoming spring break trip to Greece and Cyprus – which I anticipated would be much more difficult for him, given that we were taking more flights and would be away from home twice as long as our Egypt trip.

Well, we returned home, and I think we can all call this an unqualified success!

He didn’t get sick once.

He didn’t ask to go home once.

He still got nervous on the plane and refused to eat, but he knew we we had his familiar, “comfort” food with us and ready for him, and he requested it often.

It was night and day from our Egypt trip.

Pleeeeease let me tell you what we did! 🙂

In Noah’s Learning Support classes and Speech Language sessions, in the weeks leading up to spring break, they worked with him on acknowledging and expressing his feelings – and then talked about strategies he can use when he is experiencing these different emotions. They also had him read books about traveling, which could help him relate to the characters in the stories who are also going on trips, and they even did some role plays about traveling, even creating a fake passport for a future trip he might take.

For me, I created a highly individualized and visual social story, and showed it to him about five days before the trip.

Finding a good time and location to show it to him was important, because I didn’t want him to be upset before watching it (which might set a negative precedent), so I needed to find a time / place when I wouldn’t be taking him away from any of his preferred activities (i.e. iPad, TV, or while he was shaking / perseverating).  Had I done so, it might have set me up for failure from the get-go.

So, I decided to show it to him while he was in the bathtub.  I knew I would have his full attention and no other of his usual distractions would be available.

So the social story started out by showing him that this story was ALL about him, and trying to explain the definition of “traveling.”

To make it super personal, I tried to include him in every picture. 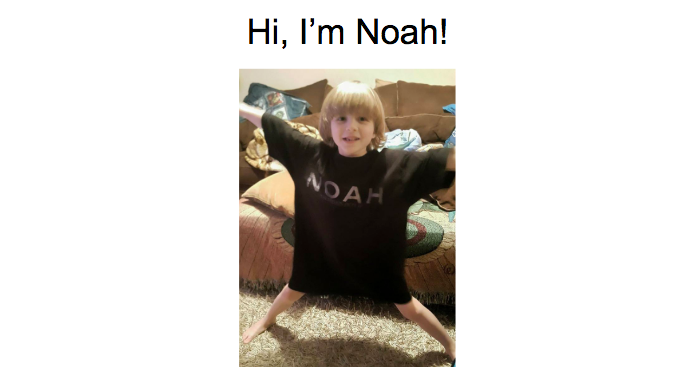 I then tried to build some confidence by showing him that he’s already been to many different places. 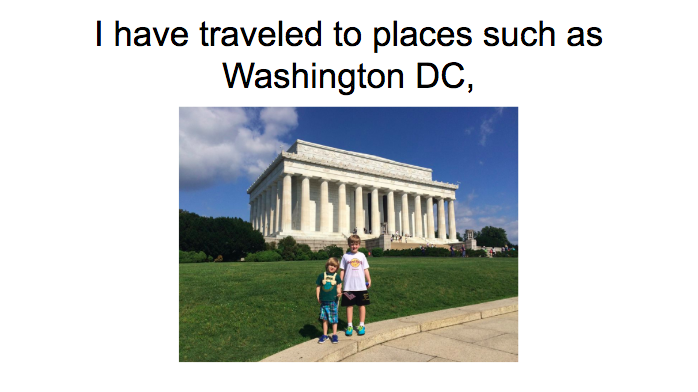 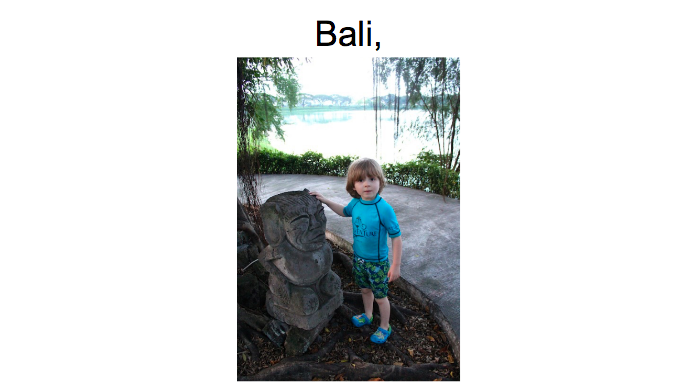 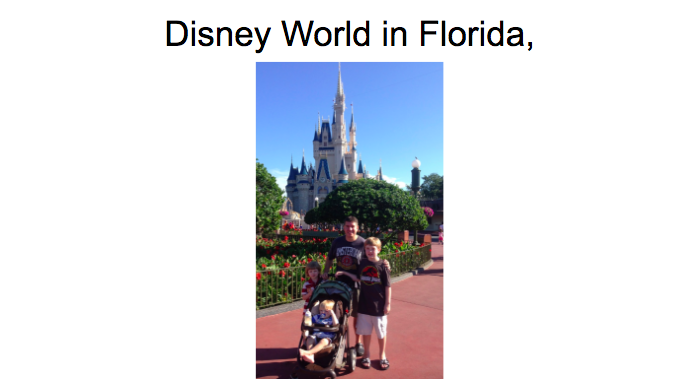 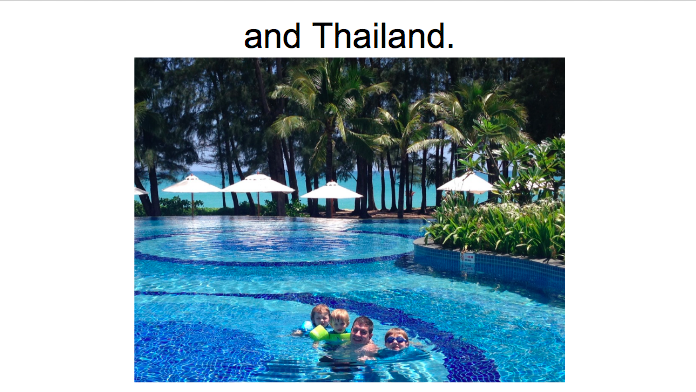 I also tried to show him what it means to take a vacation, since different people use different words when they talk about going away, i.e. travelling, vacation, and for some reason, in the international realm, a common term used is “going on holiday” (although growing up, this phrase was never used in my area of the world; I never heard it until I moved abroad). 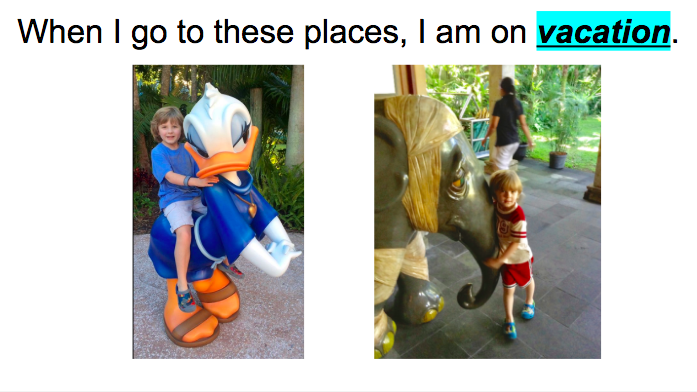 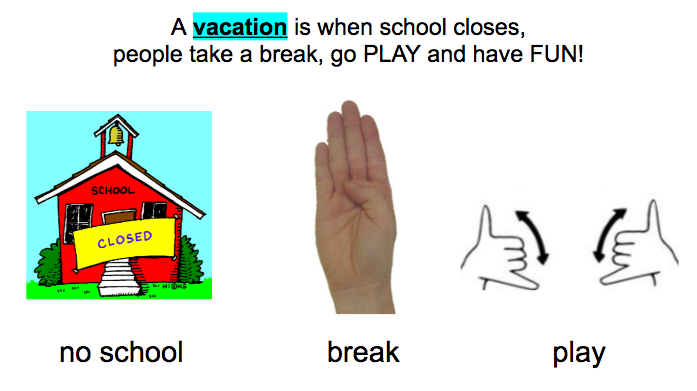 I then reminded him that he has been on many planes, again, trying to reassure him that this experience is not entirely new because he has done many of these things before. 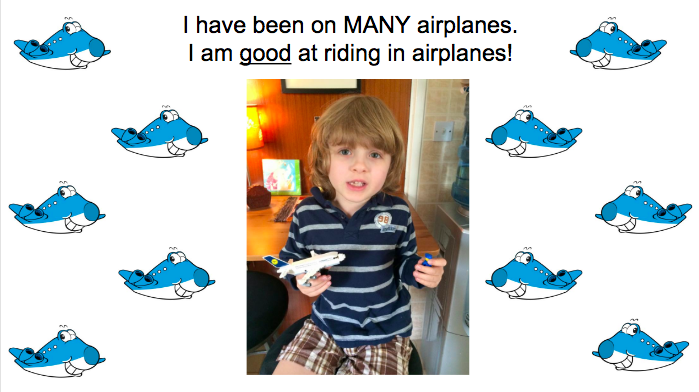 And then, of course, I needed to remind him that he would see his friends again very soon! 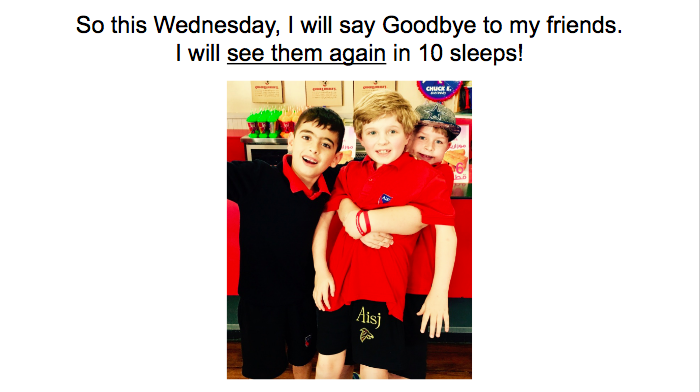 **This slide marked the first time he seemed upset.  Up until this point, he really seemed OK; I think he liked seeing himself in all the pictures, and he acted like he was understanding the point of the story.

But, when he saw this one, he nearly started crying.  So, I reiterated that it would only be 10 sleeps, and then quickly rushed to the next slide. 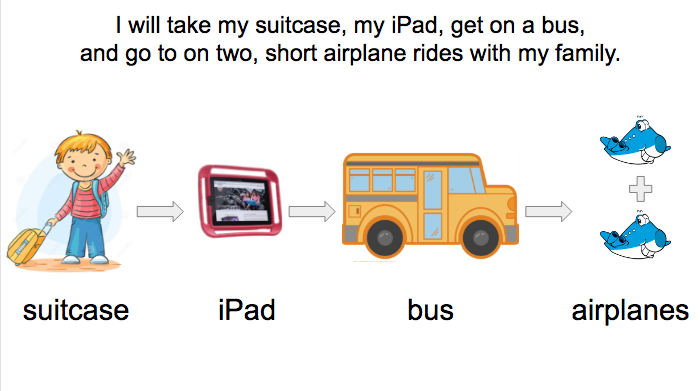 Then I showed him a series of pictures including what our hotels would look like, the food we would eat (his preferred foods) and that we would sleep.

So, at the risk of becoming repetitive, this was the main gist of the slide show.

In total it was 34 slides long, and consisted of much of the same idea as shown here – showing him pictures of the resort we would be staying at, castles we would be visiting, and – most importantly for him… the play areas we would visit!

This was the best, because while he understood what was about to happen and wasn’t necessarily thrilled by the idea of going to a castle, THIS got him excited.  And in the days leading up to the trip, this picture was what he talked about the most.  (He loves playing in ball pits!)

Sooo…  it was magic.  We were so happy, he was happy, and now we know what to do before trips.  And it was beneficial for Gabriel as well; he became very interested in the slide show when I was showing it to Noah, and although he didn’t necessarily need the visuals of what was yet to come, I do think this helped him feel more comfortable and prepared too.

And now, on to creating the next social story.  Our summer break is rapidly approaching (Hallelujah!) and we have two months of travel ahead of us throughout SE Asia.

*May the travel Gods smile on us and pleeeease let the social stories continue to work their magic on our sweet boys!*